The Ghost and the Gravestone by Julie Marcinik

Julie Marcinik. She's beautiful. She's intelligent. She's witty. And one hell of a writer. And she isn't even out of her teens yet. I'd argue that is pretty damn amazing. I met Julie when I was hosting #writeclub one Friday night. She jumped in and interacted with everyone right away, cheering them on and being supportive. Ever since then, she's been a great friend. I was lucky enough to see some samples of writing on @seeredwrite's blog, in the Wonderstruck anthology where she is published, and when she let me help her out with her query (which was pretty great for a first one).
She is always there with a cheerful comment when I'm down, support when anyone needs it, and a smile always. I really do adore this girl. She is definitely someone to watch. And know.
And her story, The Ghost is a perfect example of what she is capable of. It's a great story that left me guessing until the end. It's a chilling example of karmic retribution.

The Memory Project (continued)
Jesse leaned his chin on my shoulder while we looked at the next page of photographs. The rough stubble of his chin tickled. I giggled and kissed him on the forehead. He looked up, his brown eyes so warm, and there was this tension as if he was about to tell me something. He shook his head slightly and turned his gaze toward the page.
"That's weird," he said.
"What?" My mind was still caught up in wondering what he was going to say, what he'd been thinking.
He pointed to a picture. Another black and white. A gravestone. "Do you see that? In the picture?"
I looked closely at the image.
"I do." It gave me the chills. Another stark reminder that this suitcase and these pictures were far from ordinary. 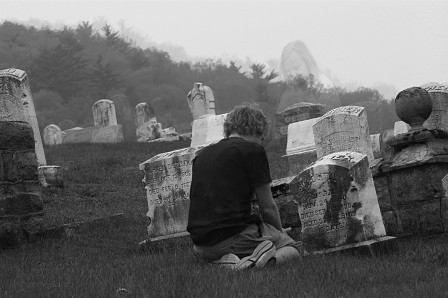 The Ghost and the Gravestone

Email ThisBlogThis!Share to TwitterShare to FacebookShare to Pinterest
Labels: Julie Marcinik, short stories, The Ghost and the Gravestone, The Memory Project